Jayson Zeeman is a guy who very few, not even himself, expected to end up running his own restaurant. But through an unlikely career path and serendipitous meetings, the 33-year-old (or 31 at the bars, or 29 on gay dating sites) has filtered his professional experience into a management style that created Z-Rant, a brunch experience of purely-prepared ingredients, an award-winning DJ and the Pinarita jalapeno cocktail that will slap last night’s dirty out of you. Saturday morning is the new Friday night. 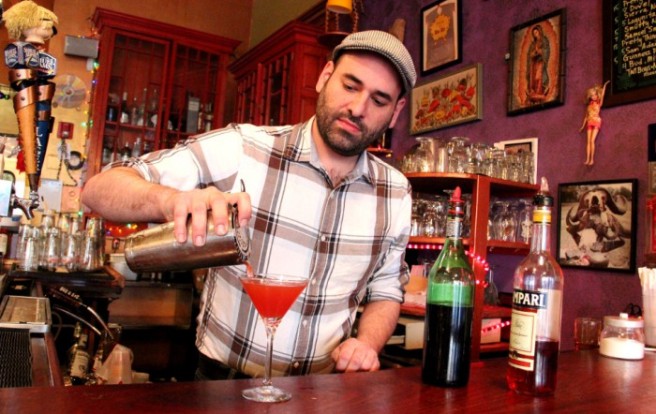 After the mid-morning Sunday rush, Jayson Zeeman stands behind the Z-Rant bar, a scruffy face under a newsboy cap, standing boyish but burley, shaking up their signature Agent Orange cocktail.

It’s been about six months since the opening of Z-Rant, the Central Square brunch joint occupying ZuzuBar smack in between The Middle East. While most restaurants at this point would be in the editing phase of their menus, Jayson says he’s only getting rid of one dish before the place opens up its patio section for the spring crowd in April.

“We can’t find one item that doesn’t sell enough,” he says proudly.

And the Z-Rant owner should be proud. The restaurant was, in many ways, a chance project that Jayson never imagined he’d create. But through a movie-script series of chance meetings, he’s created the area’s only 7-day brunch place that, through word of mouth, is completely packed for most of the week.

Strangely, much of Jayson’s success as a restaurant owner can be due to his lack of restaurant experience. It was 10 years in a PR and event planning job that eventually led him to Central Square. Working for Borders Books and Music, traveling the country and working with Madonna, or Hillary Clinton, or Janice Dickinson, the company moved him to Boston to open a location and abruptly eliminated his job while he was here.

So he found work as the marketing director for the Actors Shakespeare Project, based in the Armory which is owned by – wait for it – Middle East owners Joseph and Nabil Sater.

Now it’s starting to come together.

“When I came here, Joseph and Nabil were very generous to me, giving me free meals and all that,” says Jayson. “I was sitting here once and asked if they had a lunch menu, and they hadn’t for like 12 years.”

After a lot of convincing, the Sater brothers decided to let Jayson and the man he was in love with at the time fill the day-meal void. He had never run a restaurant before, but another chance encounter brought in one of the best in the business to help him out.

It’s turned into a sort of legendary story for Z-Rant: while promoting the Sex Pot gay dance nights, Jayson steps into the dressing room of the go-go dancers he had hired, and spots one “scantily-clad” go-go editing and fine-tuning Jayson’s prototype Z-Rant menu on the spot.

It turned out to be Hunter Jae, one of Boston’s most celebrated chefs. “I didn’t even know that she was this culinary genius who had turned around restaurants all over Boston,” says Jayson. “So we brought her in as executive chef.”

From there, Jayson spent dozens of 3 a.m. nights, cooking up about 40 original sandwiches in his own kitchen and experimenting with liquors to taste which delectable creations would make the final cut on the menu. He brought on a staff devoted to making the business work, 95 percent of whom are gay says Jayson, and all of whom could probably be making a lot more money elsewhere but stay because they love the place.

“We take pride in the people we hire,” says Jayson. “Unlike most places, everybody that we have working here really cares about the place. They were in love with the idea of Z-Rant, so they stuck through it.”

But Z-rant’s success can’t be attributed to Jayson’s good sense of character alone; those 10 years of event planning filtered into his management techniques for an advantage many restaurant owners lack.

“Every day I come in, I think of this restaurant as if I’m running an event, because that’s what it’s really like,” he says. “The tricky little thing is if you have special events, like a DJ for your brunch, it keeps you in the event listings.”

Every Saturday Z-Rant hosts DJ Leah McFly, recently voted best DJ at the Boston Music Awards, to spin some Mariah Carey to go with that “Swill n. Swine” Harpoon UFO and cilantro braised pork shoulder, or a Whitney Houston pairing for that “Soylent Green” panko-fried green tomato sandwich. Yes, Jayson has built a “kitschy” and feel-good image for Z-Rant, but they have the food to back it up (many thanks to Hunter, says Jayson).

Meats without a single preservative because they’re smoked in-house, the best grits around (ask Gus Rancatore, the owner of Toscanini’s) and the only Bloody Mary in New England whose mix is freshly juiced and strained are all testaments to how seriously Jayson takes this place.

In the years since restaurant ownership, Jayson seems to have learned a few lessons from past careers that have stuck with him: Don’t cut corners. Listen to your clientele. Juice your own freakin’ juice. It’s the little rules that have a big impact on a successful restaurant that is far from approaching the calm.

As the crew (gently) fine-tunes the menu for the spring season, Jayson is also preparing a brunch for the Together Festival in early April. He’s nowhere near done working his ass off, but he’s happier than he’s ever been.

“I started this because a guy I was in love with wanted to open a restaurant,” he says. “It could have been the worst decision I ever made, but it ended up being the best thing I’ve ever done.”